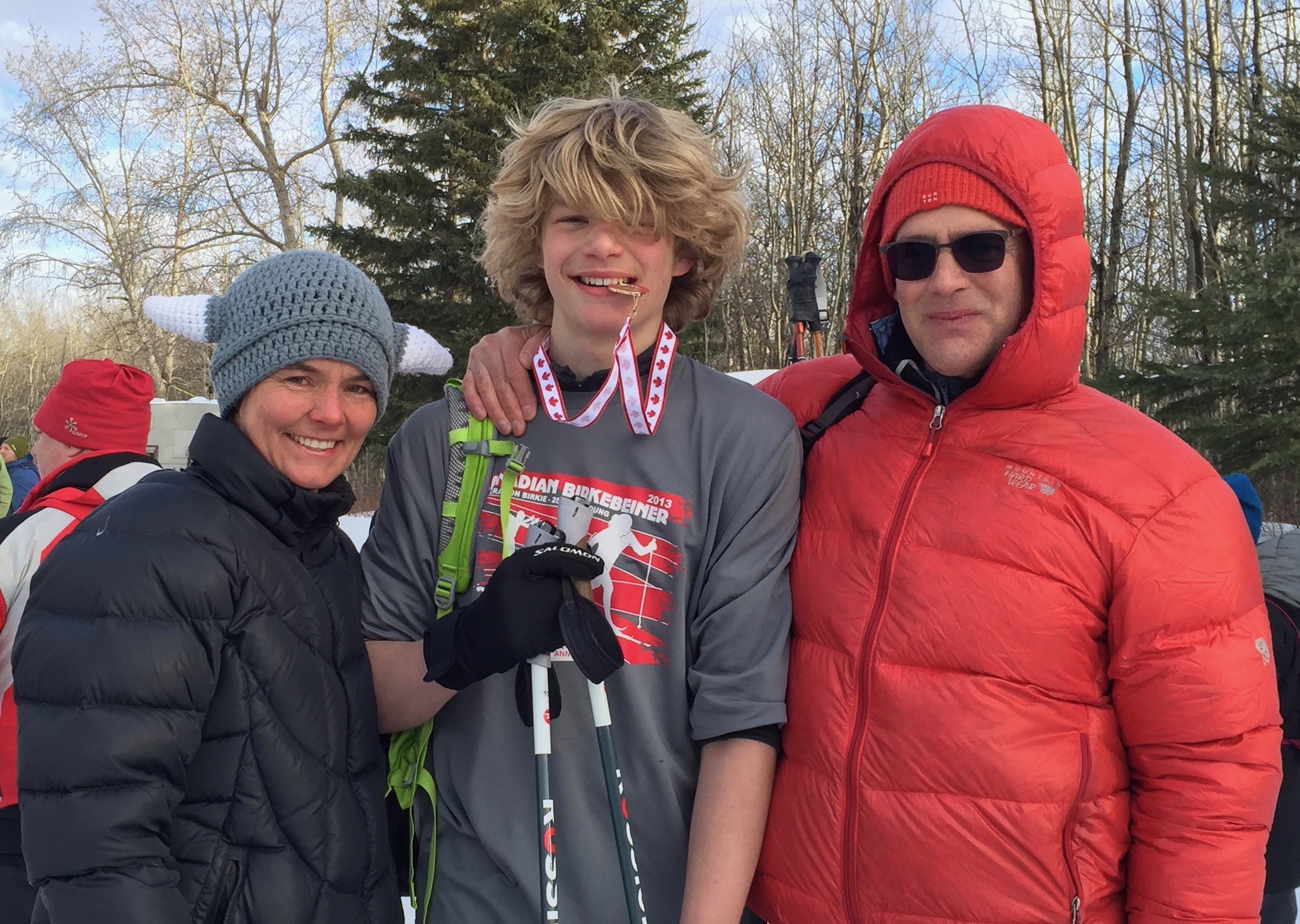 What is your cross country ski background?
I’ve been with Edmonton Nordic for 8 years now (at the time, 6 years), and my family has been cross country skiing casually since I was born. When we moved from Calgary to Edmonton I started racing in Biathlon and I’ve been mainly doing that since.
How did you train for the 2017 Canadian Birkiebeiner’s flagship distance (55 km with pack)? And with whom did you train with?
At that point I was signed up with the Edmonton Nordic ski program on Tuesdays so that was really my only classic ski training. I also had two other biathlon nights a week to whip me into shape and help with double poling.
How did you feel both physically and mentally while you completed the 55 kms? What kept you going?
I felt alright physically. I was fit and healthy so i was ok. I just kept a good solid pace throughout and tried not to think about how much time was left. It was an interesting experience just letting my mind wander for 6 hours. Also i had some of those tasty gel block things and ate lots at the soup stations. I think, at the time, it was more about reaching the soup than it was finishing the race.
What was the most memorable moment for you during your Birkie experience?
I had one really weird moment. It was around the halfway point of the race and there were a bunch of rolling hills that the trail went over. I just kind of had my head down and was doing the herringbone up the hills. All of a sudden i heard a shout and turned around to see this lady coming up behind me. She wasn’t looking at me so i figured i was hallucinating and i kept going. Then on the next hill she shouted something at me again and i was worried i dropped something so i waited there for her to catch up. She told me i had been skate skiing up the hills. I told her I was just doing herringbone but she insisted. So I dutifully turned around and started heading back. I, of course, have many memories of happy interactions with dozens of helpful volunteers and fellow racers but those stories aren’t nearly as interesting.
Would you do this distance again?
Absolutely. I love the Birkie and it would be great to get some more of these under my belt now that I can put a bit more oomph into it. I also have a dream to get on the Birkie shield (Haakon Haakonsson Award), a journey which will eventually take me to Norway and the original race site. I’ll be stoked if that ever happens.
Why did you want to complete the Canadian Birkiebeiner’s flagship distance (55 km with pack)?
I’ve wanted to do the “full birkie” from the moment i first heard about it when i was a kid. Being obsessed with vikings, as I was (and still am), I was immediately taken with the story of the Birkebeiner and the idea of reliving an ancient tale. It was like a proper quest to complete and I was in. I started with my friends doing the 13 km distance in full viking costume. (I did that for the 55 too. I started the race like that but bailed on it quick (way too hot) and put them in my backpack.) I slowly built up to the 31 km. My parents would take shifts doing the 31 with me each year and now the 55 was in sight. We basically had to figure out when I would be able to do it without being swept up by the snowmobile at the 7 hour mark. Finally, our family friend, Eric Jensen, an experienced ski racer, said just let him try it. So I did.