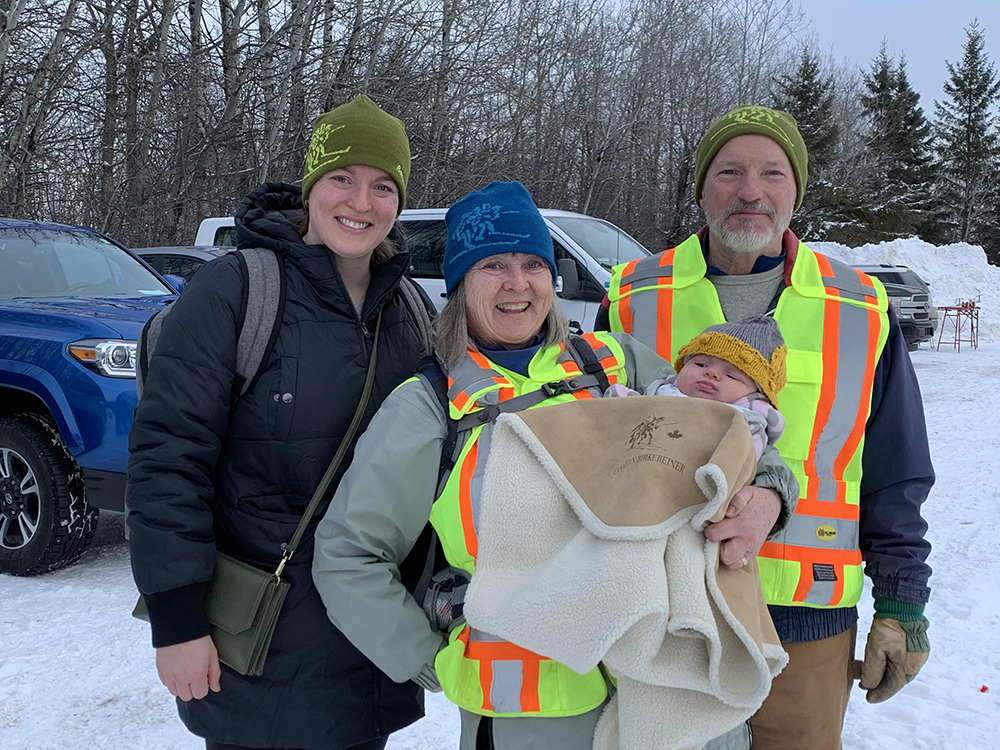 The Birkie has become a very important part of our winter since 2004. For 10 years Randy skied the 55km event carrying a 5.5 kg pack. That represented the weight of Prince Haakon. Several skiers would strap on a stuffed animal to represent  the baby. Randy had a bear with a Viking helmet. Sadly the bear has not been out for several years as Randy is now a volunteer instead of a skier. He has taken on the big job of Chief of Stadium and logistics.  He had a good team to work with, but they are just a cog in the big wheel that makes the Birkie work.  Randy’s team is responsible for transforming a large parking lot into a finish line for Birkie Saturday races and a staging area for others. They needed a large heated tent for warming up, eating and socializing. They needed change trailers, bus loading zones (there is limited parking and the start line for the long ski event is miles away) and a flashy finish line. Each skier is announced as they finish, it is exciting and festive.

I have never skied the Birkie but I volunteer. For many years I provided first aid at one of the many food stations along the route, that was fun to see the skiers pass by.  The past few years I have helped out at the end zone doing various tasks and I enjoy that.

This year was very exciting for us as our 3 month old Granddaughter, Annette, was nominated to be the 2020 Birkie Baby, she represents Prince Haakon. Her role was to be at the start line of the kids race. The race is called the Ole’ and is 2 or 4 kms. Fun to watch the little ones on skis. She also attended the Saturday night Viking Feast, she was introduced to the crowd and the legend was told by Viking warriors. On Sunday there is a kids event called Birkie Sunday. It is held in a river valley park in Edmonton. It was well attended by many little Viking warriors on skis. Annette handled her role with grace and was very cute. Of course we were very proud grandparents. My friend, Mary, knit her  Viking hat.

Now that we have finished our volunteer jobs we can ski our own Birkie. Of course there is no fancy start or finish line, no crowds to cheer us on and no food stations. However, we are guaranteed to win.