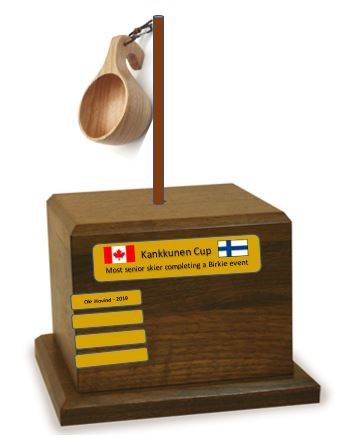 This new trophy celebrates life-long participation in skiing and competition by recognizing the oldest skier to complete a non-55 km event. The trophy honours the dedication of the entire Kankkunen family to skiing in general and to the Birkie in particular and features a carved wooden Finnish kuksa (drinking cup).

The meeting held to set up the Edmonton Nordic Ski Club in 1978 was held in Sylvi and Elmer Kankkunen’s living room overlooking Rundle Park which illustrates their long-term commitment to the sport of cross country skiing in Edmonton.

Sylvi, Elmer and their children Susan, Marlene and Andy participated in numerous Birkies over the years and Sylvi continued to participate for many years after Elmer’s passing.  In fact, some Birkie skiers have had the dubious distinction of being passed in the Mini-Birkie by this Finnish grandmother!

The recipient of the Kankkunen Cup in it’s inaugural year, 2020, is Frank Haley, who completed the 4 or 8 km Imperial Oil Birkie Fun Ski at the age of 95!