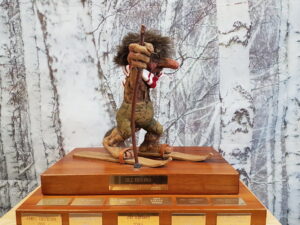 Ole Hovind was one of the pioneers of skiing in Alberta, active from the 1920’s to the 1980’s. Born in Telemark,Norway, he moved to Canada in 1926. Ole was active in all forms of skiing – cross country racing, ski jumping, alpine skiing, backcountry touring. Instrumental in re-vitalizing the then-dormant Edmonton Ski Club in 1935, he was one of a core group who formed Edmonton Nordic Ski Club in the 1970’s when cross country skiing became popular.

Well known among thousands of Edmonton skiers for running The Edmonton Journal Learn to Ski programs in the 1970’s and 80’s, he convinced several instructors in the program to go to the Norwegian Birkebeiner with him in 1983, including Les Finch, Kris Nyhus, Bill Burgess, Ken Burgess and Brian Peters. A good time was had by all! The following year these people formed the Canadian Birkebeiner Society.

The Ole Hovind Award was created in Ole’s memory and is presented annually to the skier who best represents the spirit of the Birkebeiner and the things which Ole valued – skiing for the sheer joy of it, having fun, joking a lot, achieving something and just getting out there and doing it.